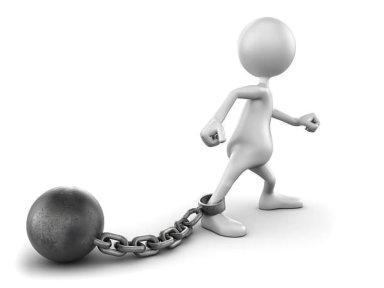 Here is why so many people are in despair and suffering emotional problems related to debt. A candid explanation of how interest affects your daily life.

While sitting in Church this morning, I heard some very disturbing news that motivated me to write this article.

I am sure that the numbers are close to being the same all over the country. But, the disturbing thing about the news in church was the fact that the suicide rate was up to 15% and that was a dramatic jump from previous years.

The pastor talked about the reasons why. The bottom line to these "tsunami" of our society's ills is credit and the economy. The majority of these people had credit issues and didn't have the resources to pay their bills.

Let's go way back in history. In the old world, I believe it was one of the great generals of history that eliminated debtor's prison. His reasoning was that most of the debtors were farmers. If, they stayed in prison, then who would grow the crops to feed his army? Hmm. Well, that was a couple of hundred years ago and before the emergence of credit as we know it.

But, nevertheless, it was still credit. You borrowed, you owed, you couldn't pay therefore you were punished. Have we come so far that we have become to retreat back to that same situation that prevailed hundreds of years ago?

I don't think our politicians nor do our bankers realize the havoc, pain and hardship that the average person is under because of one issue alone. That, my friend is the cost of credit. If, you don't think that your neighbor is worried about not having enough money to pay his bills, then you are living in "la la" land.

Lets take a look. I had written a previous article about the rule of "72" and how it impacts everyone. Time to explain it just a little more in depth. Lets just say that your, Mum has $10,000 and puts it into the bank. She is very happy because the bank represents security. In fact, if you tell her that she can make more by buying municipal bonds, she gets the "broom" out and comes at you.

So, here is Mum with her secured savings. Now, lets say that her friendly banker, with that "snaky" grin gives her a passbook for her to keep track of more money she puts into his bank. He offers her a (04%) interest on her money. Now, divide that (04%) into 72 and see what the number is. It is exactly (18).

Amazing that this is not taught in the higher universities in our county but everyone that has gotten his "masters in street finance" knows this.

Ask any bookmaker what the rule of "72" is and he will spit it out like "fire from a dragon".

Now, lets just go into a different room. Lets say that you got a credit card. Now, lets say that because you were late on a payment, they jumped the interest rate to (36%). Yeah, it happens. But, here are some real shocking numbers. Listen up.

I am going to start with a basic small amount of ($300.00). This seems to be the amount that the average family started out with. Now, lets just say that you for some reason was either late or went over the limit. When you combine both of those problems, you incur a penalty of ($78.00) per month. Go ahead and add up both of the penalties.

Now, here is where the "hidden gun" comes into your life and virtually "steals your hard earned money" and they never pulled the trigger. If, you think that some petty thief that held up the local gas station to feed his family is a bad guy, and he only got ($50.00) lets put this in your pipe and smoke it.

Lets add up those late fees and the over limit fees for twelve months.

Worried? You should be. This is what is happening and has happened to hundreds of thousands of Australians - and millions in my country of America. Now you owe at the end of one year ($1,238.00) and when you multiply (36%) annually, you now owe the credit card company ($1,682.98) at the end of only twelve months and you haven't bought anything.

Here is where the tears turn into blood. Let's jump ahead to the end of year two. Now, you might have gotten some phone calls but nothing that broke any dishes. But, at the end of two years, here is what you owe the company that gave you a ($300.00) credit card and never put up any money. They collateralized your signature. Anyway at the end of two years you owe ($2,288.85)

This my friends is the main reason why people commit suicide, politicians turn the other cheek because of the strength and influence of the lobbyists, the banking industry wants you to believe they want to help you, but when you fully grasp the mechanics of the "rule of 72" you either throw up your lunch, kick the dog, argue with the wife or get drunk.

But will this problem go away? Not unless you grab the bull by the horns and learn what to do.